At 4:41 pm on April 14, 2014, we welcomed baby Christian Joseph Ross into our family!  He was 8 lbs. 8oz. and 20 inches long.  His older brothers Roman, Adrian, and Jonathan came to see him when he was just a few hours old and were so happy to have a new member of the family!

As with my other deliveries, I had to be induced.  This gave me time to knit while the pitocin gradually did its work.  I had been working on a sweater for myself for the past several weeks and relished the opportunity to have some kid-free time to work (despite the contractions)! 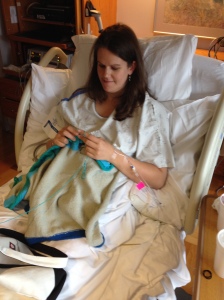 Since this blog has had a heavy focus on knitting, I decided to share some of my favorite pics of my new little one wearing his homemade apparel: 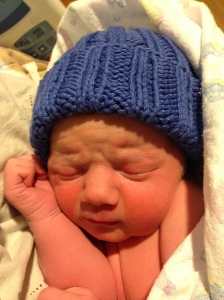 Wearing his new hat, just after he was born and spending time with Daddy the next day 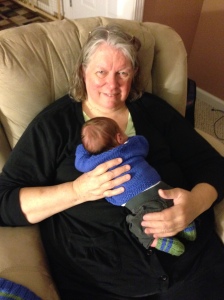 Dressed to go home in the hat and socks I designed, worn with the first sweater I ever knit.  Christian got to spend some time with Grammy in his new outfit.

Of course, I literally have hundreds of pictures of him already.  I decided to narrow it down to just a few that showed some of his new knitwear.  Now I’m working on some coordinating sweaters for my entire crew of boys!

Crochet the Day Away

Right as Rainbow Sweater for Me!