One of the greatest things about cold weather (one of the ONLY great things about cold weather) is the chance to wear the things you’ve been knitting all year. Although my boys have some hats I crocheted for them years ago, I figured they needed to upgrade to some knit hats and it gave me a chance to learn more about hat construction. Thus became my mission… to knit hats for the family!

At the end of October I had knit plenty of things for my kids, but hadn’t made much for me. I had bought some Brooklyn Tweed Shelter (colorway ‘Thistle’) to knit Jared Flood’s Laurel hat. I thought, “It’s small, I should be able to finish in a night.” Ha! The pattern is lovely and the chart was easy to read, but I wasn’t as quick as I dreamed I was. I finished in about three days, but long hours were put in during that time. It was a great learning experience, but I kept making small mistakes and needed to tink back or ladder down to fix the problems. In the end, the result was beautiful. I love my new hat and I love that I took the time to make something for myself! 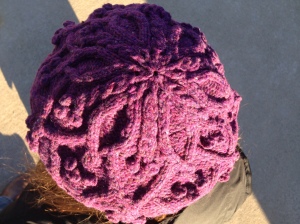 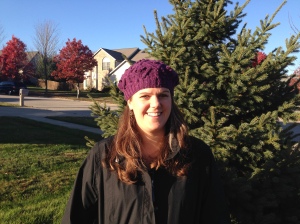 As the cold winds of December blew in, I started working on a hat for my baby. I wanted to try knitting Tin Can Knits’ Clayoquot cardigan with colorwork (I had knit this pattern without the colorwork here), but I thought I would start with the Clayoquot Toque. I knit this one in less than a day. It’s super cute, but I do wish it was just a bit larger. I try to make things to last more than a couple months, but with growing boys that’s tough to do! This hat looks nice and is quite durable knit in Cascade 220 Superwash. 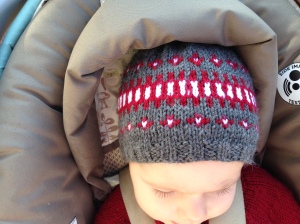 Moving on, I wanted to try out a pattern from the Tin Can Knits book Pacific Knits, which I had recently received. I used some lovely Dream in Color Classy yarn (colorway ‘Peacock Shadow’). The pattern is Sitka Spruce, and uses twisted stitches to create an awesome geometric pattern. This one was not for my boys, though. This one was a gift for a special friend who has recently moved to a much colder place. I figured the warm wool would be perfect for those snowy days in Buffalo, NY. This one also turned out a little shorter than I wanted, but after blocking it was closer to the correct size. The tonal yarn looks amazing with all those twisted stitches! 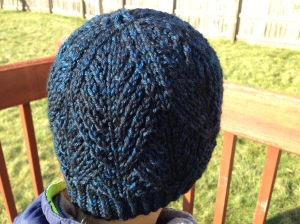 Three days before celebrating Christmas, I decided to make a hat for my husband using more Brooklyn Tweed Shelter (colorway ‘Birdbook’). I chose Apple Pie— another TCK pattern. This one features a ribbed doubled brim. Although it was tedious to knit the extra length of the doubled brim, I think it will be super warm. All the cabling within this hat took a long time, but I love the results. I love how it looks on me, so it was almost a disappointment when my husband loved it and wanted to wear it! (Ha! Just kidding!) That doubled brim was a foreshadowing of a future project… a project that made the hat brim seem like nothing at all (more details to come!).  Here is the hat modeled by Yours Truly.

Next up was a hat for my second son, Adrian. I decided to do yet another TCK pattern (I own two of their books, of course I’m going to knit their patterns!)– Stovetop. This uses moss stitch to create an interesting texture and some simple cables along a main panel. The crowning glory, in my opinion, is the pompom on top. I knit this one with some leftover Plymouth Worsted Merino Superwash (colorway ‘Primavera’) and I am SO happy with how it turned out. Although it was created for Adrian, my third son Jonathan has adopted it as his own and looks incredibly cute in it. Here it is modeled on Adrian:

Dying to try more simple colorwork, I found The Easy Ombre Slouch Hat, by Paul S. Neary, a free pattern on Ravelry. I changed the pattern quite a bit (detailed on my project page), but it was exactly what I was looking for. I used the same Plymouth Merino Superwash used in Adrian’s hat, paired with some blue yarn of the same brand. This design also inspired me to design a sweater with a similar effect. I loved the results, but my oldest son Roman has been crocheting hats for himself, so this one doesn’t get much use.

One final hat to add to the post… another one that was intended for me! Although the Laurel hat I made at the beginning of this post is great for cooler weather, I wanted one that could withstand heavy snows (not that we’ve had any this year). I used, you guessed it, a TCK pattern. This one is called Tofino Surfer and is from their book Pacific Knits. I had some trouble finding yarn to get the recommended gauge. I settled on some Cascade 128 and used a size 9 needle. The hat turned out great with one exception. Because I used a smaller needle size, the tighter stitches caused it to stick up straight instead of slouching. As I blocked it I stretched the wool, which helped a lot, although it does require a little push to make it slouch. No modeled pic for this one:

What are your favorite hat patterns? The cold weather isn’t through yet… I could always knit another!

Knitting a Sweater, Keeping it Small

My goal for the year is to knit a sweater for myself.  I was not ready to jump into such a large endeavor, so I started looking up newborn sweaters.  I figured I would start small… if I could create a newborn sweater, there’s a chance that I might be able to create one for myself one day in the future.  I searched ravelry for an easy newborn sweater, and found one that was knit in one piece using worsted weight yarn.  This sounded like a good option, so I went with it!    Unfortunately, it was linked through ravelry, but it was actually from a book.  The good news was that my library had a digital copy in stock and I was able to borrow it for free on my phone, found and downloaded in minutes.  (Side note: if you have the technology, I highly recommend borrowing library books through digital media!)  You can click here to link to the pattern I found on ravelry, or you can find it in the book More Last-Minute Knitted Gifts, by Joelle Hoverson.

Using the same circular needles I used on the hat, I was able to knit the sweater.  Although it is not done in the round, the circular needles provide lots of space to create larger projects.  Then you can simply switch back and forth between the needles as if it were knit using straight needles.  Knowing this, I have almost completely converted to circular needles!

Next decision: what yarn to use?  I found some great yarn at Hobby Lobby that is 100% cotton (“I Love this Cotton!” in blue).  The downfall to using cotton for a sweater is that it is not as springy as a wool yarn or mixed yarn (according to the lovely lady at the yarn store).  This makes sense and is good information for when I create a larger sweater.  For a newborn, though, I don’t think the yarn needs to be as springy and it’s hard to beat the soft feel of cotton while holding that sweet little one.

The project began at the bottom of the back of the sweater and utilized the seed stitch.  I had never done a seed stitch before, but it is created simply by alternating knit/purl stitches.  Instead of lining them up like you do to make ribbing, you stagger them.  Once again, if you don’t know how to do it, look on YouTube.  That site has revolutionized crafting!

It was SO exciting when a sweater shape started to form! Here it is with the back of the sweater completed. (Note: the wavy shape along the back is a result of it being held on the curved wire of the circular needles.  It would not lie completely flat while attached. Also, I realize the lighting is bad, so you get a better idea of the actual sweater color in the final pictures.)

You’ll also notice in the picture that I got to use stitch markers for the first time (and understand what they were for).  Stitch markers slide onto your needle according to the pattern directions (typically indicated as “pm” or “place marker”) and you slide them onto each new needle as you stitch.  As you work, the markers define the changes in the pattern.  For example, you can see in the picture that the seed stitch was worked along the cuff  to create a pattern at the end of the sleeve.  Then the stitching went back to stockinette before reaching the stitch marker at the top of the garment, indicating that I should switch to seed stitch along the collar of the sweater.  The two remaining place markers work the same way to keep the garment symmetrical.

This project was a challenge, but it gave me a good understanding about a lot of techniques used in making a sweater.  It did not turn out perfectly, but, hey, I had only been knitting for a couple of weeks!  The biggest problem was that the stitches did not line up perfectly, so it caused some bumps during the seaming and prevent the front of the sweater from lining up just right.  Because of this, I am still debating whether or not to add buttons.  The pattern did not call for button holes, but says that the stitches have enough room to fit small buttons.  I have my doubts about this, mostly because my husband has a hard time lining up buttons on a baby when there are actual holes that match up.  That, and I kind of like it button-free.

I hope to knit a few more small sweaters before I attempt to put the work into making one for myself.  With boys ranging in ages from newborn to age 7 1/2, I figure I have plenty of “models” for creating garments.  I want the sweater for myself to look GOOD, and not look like some kind of craft project… my boys aren’t as picky! 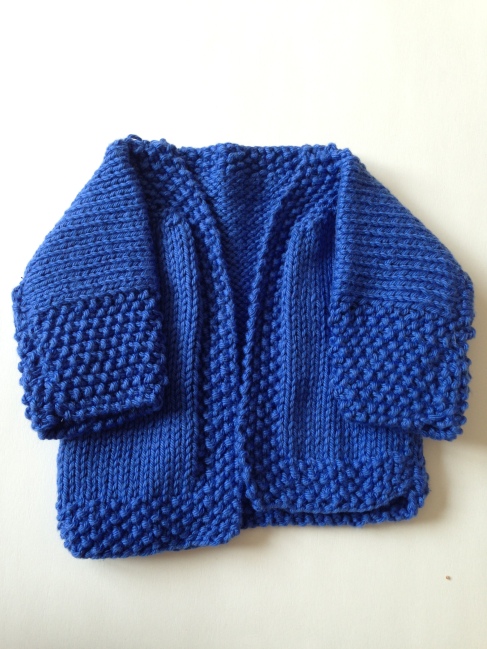 Along with the blue cotton yarn, I purchased some coordinating green yarn.  I’ve been using them to create mix-and-match separates, which I plan to blog about.  Here’s a sneak peek of what’s coming: