I finished the blue ribbed hat, but wanted something a little cuter for my new little guy, and also wanted to challenge myself with stripes.  I had learned through one of the YouTube videos I watched that you had to do something special to create stripes while knitting in the round.  I did not remember the technique, but did remember that it wasn’t too complicated.  I found a pattern through ravelry that had some of the basic shaping of the hat I wanted, but it used a needle size that I didn’t have and I wanted to make changes to the pattern anyway.

I used my previous knowledge of hat making (from both knit and crochet– I have crocheted over 100 hats in the past couple years) and the ideas in the ravelry pattern to design my own knit hat pattern.  I once again utilized the Magic Loop, which has become one of my favorite knitting techniques.  I also utilized YouTube videos to create jogless stripes on this little boy’s hat.  While I can’t explain how to do a jogless stripe, I can tell you that it’s not hard.  In fact, the hardest part is remembering to do it when you start the second row of a new color.  This pattern also used PSSO, which is a techinque involving Passing Slipped Stitch(es) Over a knit stitch.  I slipped the stitches purlwise, but learned in subsequent hats that it worked better to slip them knitwise.  The PSSO technique can be seen in the raised stitches in the picture below.

The pattern I created ended up with an adorable little star pattern on the top.  I made some adjustments to my own pattern, and in the next few weeks created hats for two different friends’ baby showers.  One couple is Jamaican, so I used the colors of the Jamaican flag.  The other couple are both professors at Indiana University, so I used the IU Hoosier colors of crimson and cream.  Once again, I need to write up my version of the pattern because I plan to use this for many baby showers to come!

After creating the jogless stripes of the baby hat and creating my own newborn hat pattern, I decided to try it with socks.  I had already made a few adjustments to the baby sock pattern I had previously used, but now I wanted to change it completely and make it my own.  I still used the worsted weight yarn and the size four DPNs, but now I wanted to continue the ribbed pattern all the way down the heel and use my newly-learned skill to add jogless stripes and colored toes to the socks.  It took a little bit of work to figure out the right number of rows/stitches to achieve what I wanted, but I was SO happy with the results.

As you can see, one of the colored toes ended up longer than the other, and there are a few other minor differences.  This is because I was more focused on improving my own pattern rather than making them identical.  I love the green and blue cotton yarns, and look forward to mixing and matching these socks with the blue baby sweater and the two different baby hats.  Now to make another baby sweater in the green…

Knitting Socks for a Giant

Okay, I didn’t actually knit socks for a giant, but with the size of my feet, I might as well have.  I wear a women’s size 11 shoe… a size that’s hard to find in most stores.  Needless to say, the “one size fits all” socks they sell do not fit me very well at all.  Even if they go on my foot, they tend to get holes in the toes before the end of the season due to being stretched too thin.  These reasons of course played into my decision to knit myself a pair of socks, but the main reason was that I felt it would be a tremendous achievement if I could actually do it.  I would use tiny knitting needles (size 1.5) and sock weight yarn, which is very thin.  If I could complete an entire project with these materials and have a pair of socks that actually fit my feet, I would consider that quite the accomplishment.

I scoured the patterns on ravelry, and finally found one that listed an XL women’s pattern along with a lovely design.  Click here to see Sarah Ronchetti’s Basket Weave Rib Socks pattern.  After I had decided upon a pattern, I went to the yarn store in town to pick up some specialty sock yarn.  If I was going to devote the time to this project, I wanted to invest in quality yarn.  I found a great wool/silk blend that combined varying shades of blue and green.  I debated whether or not this would make the socks too “busy” (since they already used the basket weave pattern), but after consulting with the lady at the yarn store, I decided it would work fine.  I also invested in a pair of high-quality circular knitting needles, the addi lace knitting needles (size 1.5), so I could make the socks by using the Magic Loop method.  Once again, I felt it was worth the investment in the project to buy something that would be easy to use for a challenging project.

I began creating the first sock and realized immediately this was no small task.  The first inch of ribbing used about a thousand stitches, and that was only the beginning!  Once I got into the pattern, I was frequently confused about where I was and what row I was doing.  It’s not a very complicated pattern, but I was so new to knitting and the stitches were so small that I found it to be quite a challenge.  Here is a close up of the pattern as it began to unfold:

Because I had created the worsted weight newborn socks, I had some experience with knitting the parts of the sock, which proved to be very helpful.  I did not experience any difficulties while creating the heel, turning the heel, or knitting the gusset.  I grew to have a love/hate relationship with the socks.  While I absolutely HATED how long it seemed to take, I absolutely LOVED the pattern that emerged from the tiny little stitches.  While in the process of knitting the first sock, I took several breaks to work on other projects.  Thus, the entire sock probably took about 10 days-2 weeks.  When I finished it, I seriously considered alternatives to finishing the pair (could I start a one sock trend? match it with another sock I already owned? cut off my other foot?).  I took a week off and then decided I actually missed using those tiny needles and experiencing the beauty that unfolded from the creation of those little stitches.  I decided to power through and finish the pair.

The second sock I created had a slightly different pattern due to the variegated yarn.  I enjoyed watching the new pattern emerge and I found that things went more quickly with the second sock as I had a better handle on the pattern.  Certainly not quick, but at least faster than before!  These are, without a doubt, the most expensive, time-intensive socks I have ever owned.  They fit nicely, though, and they’re both soft and warm.  I love to look at them and friends who have knit socks promise that they will last a long time.  And, after the exhausting (but rewarding) experience, I’m actually considering making another pair!

After tackling the sweater, my next ambition was to create some socks.  Socks were another knitting creation that had me baffled.  I can knit my own socks?  Like, to wear?  There are whole sections of yarn stores devoted to “sock yarn” and dozens of patterns on ravelry and other sites devoted to socks.  Nevertheless, I was intimidated by the idea of creating my own.

I decided to start small, as with all of my preceding projects.  I wanted to create a pair of newborn socks for the baby.  I was pickier than that, though.  I did not want to use the special (and expensive) “sock yarn.”  I wanted to use the same worsted weight cotton yarn that I had used for the newborn sweater.  After all, I wanted it to match perfectly.

I did some pattern searching and came up with this pattern for Simply Sweet Socks.  This pattern allowed me to make newborn socks while still using the worsted weight yarn.  Unlike other patterns that tried to simplify newborn socks, this one still required the heel flap, turning the heel, and knitting the gusset.  All of these terms were things that I knew were important for knitting adult socks, but they were all new to me.  I wanted these newborn socks to be an “intro to sock-making” on a small scale, though, so I wanted to learn how to do each of those steps.  The pattern also called for size 4 double pointed needles (DPNs), so this would be my first real attempt to work with DPNs. 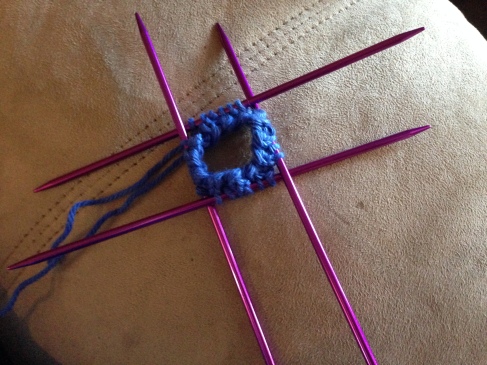 The pattern called for using four DPNs (with 6 stitches on each needle), although once I understood what I was doing I reduced the number to three (with 8 stitches on each needle).  I had previously watched a video of someone using DPNs, and I knew it was important to pull the stitches tight between the needles, otherwise I would end up with a ladder effect.  The DPNs worked fine, with one exception… they kept poking at my big pregnant belly!  Reducing the number of DPNs from 4 to 3 was helpful, but I still was not a fan of using these.

Knitting the heel flap and turning the heel were both easily accomplished, but I had to watch a YouTube video on how to pick up the gusset.  It wasn’t hard, but it is not easily explained.  I highly recommend watching a video to help you through the first time.  Here is a picture of the sock in progress, after I had picked up the gusset stitches: 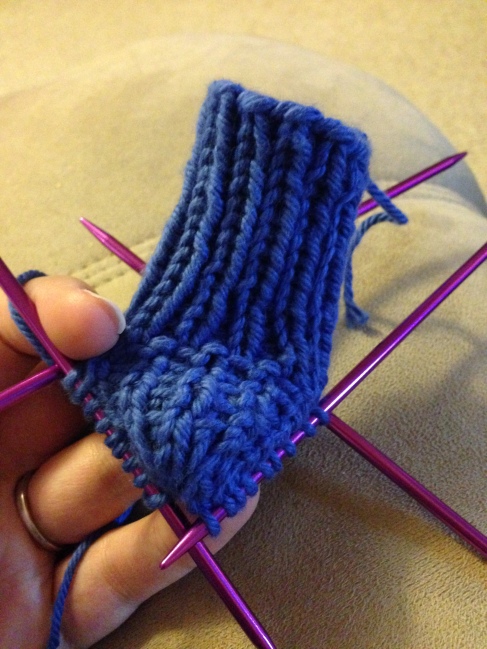 The rest of the knitting went smoothly, although I noticed a few changes I would like to make to the pattern.  One was the way the heel looked.  Because of the slipped stitches, the heel was reinforced, but didn’t look as smooth as it would if I had run the ribbing all the way down.  I decided that if I created my own sock pattern (foreshadowing!), I would continue the ribbing. 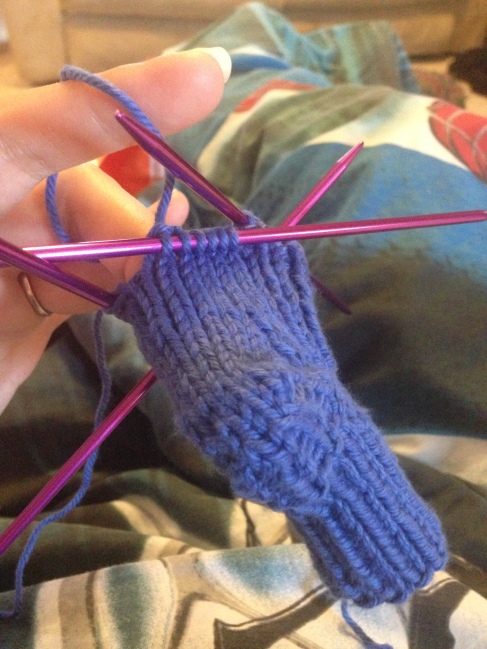 Another change I did make to the pattern was to finish off the toe with a kitchener stitch.  I had watched a video of someone making socks, and noticed the nice finish they made by “grafting” the toe (aka using the “kitchener stitch”).  Because this is how adult socks are finished, this is how I wanted to finish my newborn socks.  The original pattern calls for a “star toe” by threading the yarn through the remaining stitches and pulling them tightly to a point. 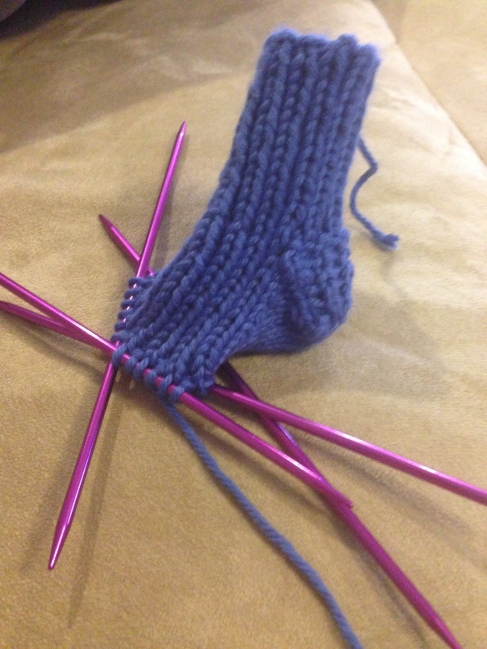 Once I was to this point (see pic above), I shifted the stitches evenly onto two needles and lined them up to create the top and bottom of the sock.  I then followed the YouTube video instructions (just search for “kitchener stitch”) and created a beautifully grafted edge.

The first sock was a bit of a learning experience, but the second one went very smoothly.  I love that they were quick to make and that they match the handmade sweater perfectly.  Next up: a hat to complete the set!